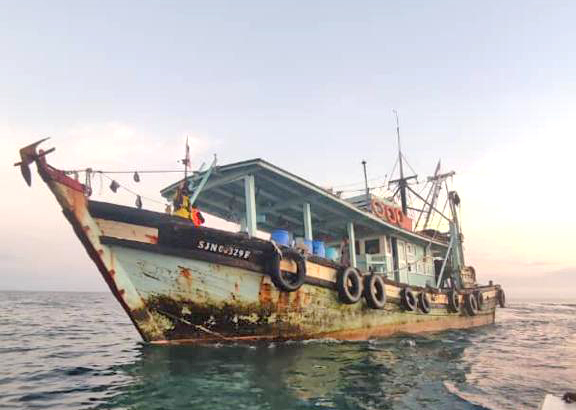 One of the boats  caught for illegal fishing.

“The Malaysian Maritime Sea Surveillance System (SWASLA) spotted one of the suspicious vessels about three nautical miles off Tanjung Tembungo Tuaran around 3.30am.

“Upon inspection, MMEA found none of the crew’s names match the ones on the boat licence,” he said, adding that all the crew and the fishing vessels were towed to the MMEA headquarters for further investigation.

About an hour later at 4.50am, SWASLA  spotted another suspicious vessel along Teluk Ambong in Kota Belud.

An MMEA boat was deployed to the location and upon inspection found that some of the crewmen did not have valid documents.

“The vessel was also towed back to the MMEA headquarters in Sepanggar for further investigation,” said Mohd Rosli.

Both cases will be investigated under the Fisheries Act 1985, the Merchant Shipping Ordinance 1952/60 and the Immigration Act 1959/63.