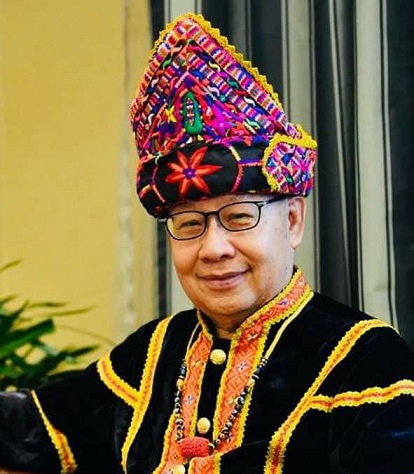 “We are going to put together a good team of professionals and good economic development strategies for Sabah.

“I expect that if we succeeded in doing this, we would be able to double Sabah’s GDP per capita from USD6,000 to USD12,000 within the next two years.

“Such strategies must include highly impactful development activities at all levels of society. Poverty and corruption must be eliminated through digitalising the economy, blockchain and by activating ‘lazy assets’.

“We must have a shift in our mentality and could not afford to continue with our old ‘Business as Usual’ ways,” he said in his new year address.

According to the president of Parti Solidariti Tanah Airku (STAR), Sabah’s economy must be raised to a global platform to take advantage of global opportunities and raise Sabah’s financial capacity. Only then Sabah can be more financially independent.

He also mentioned that just over a year ago, the Gabungan Rakyat Sabah (GRS) won the snap election and when they took over, Sabah was in high unemployment, poverty was rising, confidence was low and GDP continued to plummet despite good times anywhere else in the world.

“To top it all off, we took rein of the government at the worst time possible – right in the middle of the Covid-19 outbreak, a once in a century pandemic. Our already ailing economy was plunging at breakneck speed toward oblivion and the election result at the time showed that the public was fed up with a government that lacked direction and vision for Sabah.

“When GRS was elected, I knew then what I know now that we have to somehow wriggle ourselves away from the traditional and established economy. I knew that Sabah would never be able to compete with her much larger, much advanced neighbours like China and Indonesia.

“We lack the necessary infrastructure and the right people to launch a new industrial revolution in Sabah. I have dreamed of Sabah becoming a regional hub for high speed internet because of our geographic location, but that proved to be easier said than done and requires a lot of money; money that we do not have,” he added.

Jeffrey also further elaborated that the state had spent billions of ringgit to develop its infrastructure for the past decades, but the investment that the Sabahans crave never come.

“We can only look with envy at the prosperity of our neighbours.

“Eight of the ten poorest districts in this federation are in Sabah. Despite all our resources, our oil and timber, we still could not eradicate poverty in our great nation.

“However, come to think of it, we are not at all poor. Take a look around you. We are blessed in abundance with our beautiful nature, our heritage. And while the world of old may reward the industrialists, in the world today, green is gold,” he said.

For any country in this world, Jeffrey said, to succeed, they should consider going green and dive into the circular economy.

He pointed out that the whole world is concerned about the negative effects of climate change, not only on the global economy and health, but in the survival of humanity itself due to carbon emissions and environmental degradations.

With what Sabah already have, he said, the state in the perfect position to partake in this new economy and walk shoulder-to-shoulder with the rest of the world.

“But going green is not just about the environment, nature and conservation. It is also about healthy living and the emerging circular digital economy – smart carbon, green technology, Artificial Intelligence (AI), machine learning, deep learning, big data, organic and sustainable farming and cryptocurrency and blockchain technology and the dawn of metaverse.

“Sabah must move away from the conventional exploitative extractive economy into the digital circular economy and given Sabah’s vast agriculture forest and nature capital endowments as well as its strategic geographical advantage and potentials, we are poised to do just that,” he said.

While Sabah must capitalise on these competitive advantages, Jeffrey said what the state need now are:

a. Stronger, braver and more innovative leadership and good governance;a. Good and efficient infrastructure including ports and harbours with a well-connected multi-modal transportation network of roads, railways and public transport systems;

b. Internet connectivity with up-to-date 5G services and international gateways;

d. Economic and professional manpower resources and connectivity with right educational and training policies and platforms to empower our people particularly our youths and women;