Seafood produce to be taxed when business okay

Seafood produce to be taxed when business okay – Jeffrey 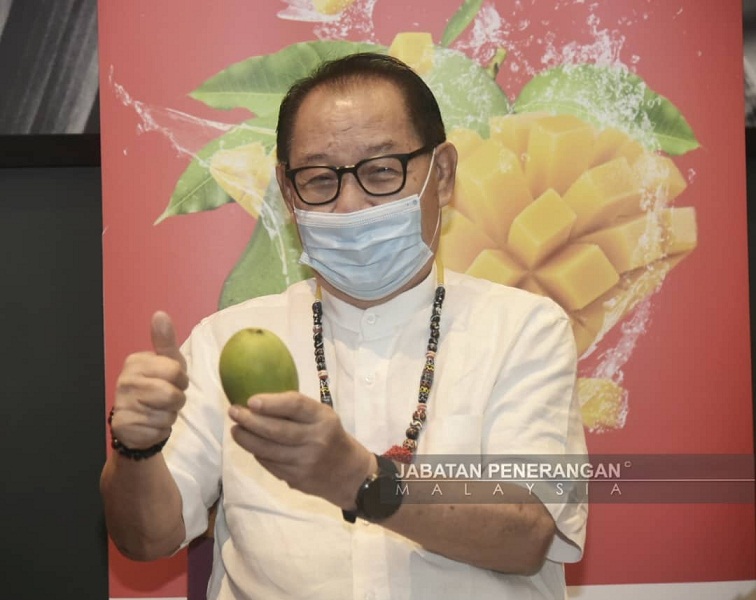 Jeffrey holding up the harumanis mango, one of the main attractions of the AirAsia Farm initiative, at the AirasiaFarm media roundtable at Tune Hotel, 1Borneo Hypermall.

KOTA KINABALU: Implementation of sales tax on seafood produce, at a rate of between five per cent and 10 per cent, will be done when the time comes.

Minister of Agriculture and Food Industry Datuk Seri Panglima Dr Jeffrey Kitingan said the tax will be implemented “once business is okay,” adding that the percentage had been adjusted as well.

“Some are 10 per cent, some are five per cent, but under the current circumstances, we are not able to export anyway so what is there to complain about?

“We will implement it when the time comes, once business is okay. The law has been there, sitting, doing nothing. When we export, we expect to collect something, but at the moment we do not expect much export,” he said.

Jeffrey, who is also Deputy Chief Minister, assured that the government will reconsider anything that will burden the people and negatively affect the economy.

When met by reporters after attending the AirasiaFarm media roundtable, Jeffrey also said although his Ministry was the one involved in the matter, the issue of tax is under the Ministry of Finance.

He was responding to a statement made by Tanjong Papat assemblyman Datuk Frankie Poon, who questioned the decision of the Gabungan Rakyat Sabah state government in imposing the sales tax of up to 10 per cent on seafood produce.

In the statement, Frankie expressed concern that the tax imposition would further damage the economy and people’s livelihood. He urged the state government to demand revenue from petroleum sales tax from the federal government instead.

“Hardly any extra fund has been given to Sabah. Instead, it is so shocking to learn of the imposition of sales tax all of a sudden by the State Government.

“Sabah is on an island where it would be costly to sell our produce due to logistics. An extra five per cent to 10 per cent in the costs of the products would certainly cost the buyers more, which of course could deter them from buying. Many thousands of workers will be out of jobs if this sales tax is not shelved. Many will once again go hungry.

“This is not the right time for the state government to impose such tax. Instead, if the state government is short of funds, it should pursue the federal government for our 40 per cent nett returns after deducting the necessary expenses from the collections as enshrined in the Federal Constitution,” said Frankie.