By MUGUNTAN VANAR and STEPHANIE LEE 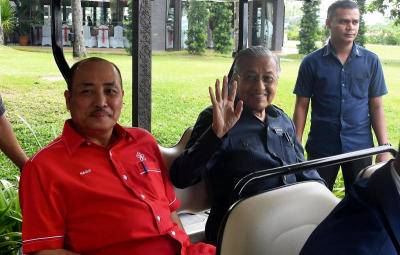 KOTA KINABALU: Agriculture could play a key role for Sabah and Sarawak to help enrich the rural people.

Prime Minister Tun Dr Mahathir Mohamad said both states had large land banks that could be developed for agriculture purposes.

"We are reviewing the agriculture policy to bring about more modern agricultural practices," he told reporters after a one-day state visit to Sabah on Tuesday (Sept 17).

Dr Mahathir said this when asked about some disappointment among Sabah and Sarawak that no specific goodies for the two east Malaysian states were mentioned in his Malaysia Day speech in Kuching on Monday (Sept 16) night.

"The goodies come together with all the other states; we want to ensure there is no disparity among the states.

"Sabah and Sarawak are the richest states, we want to stress that both states have a lot of land and they must concentrate on agriculture," he said.

He said through reviewing the country's policy on modern agriculture, it will ensure that people in rural areas could also become rich.

"That is what I was saying last night. I did not specifically say it, but Sabah and Sarawak have the land," he added.

On a question about the two states needing more funds due to them for development, including higher oil royalty, Dr Mahathir replied: "We owe RM1 trillion and if we do not pay, we go bankrupt.

"Most of our revenue is going towards paying back these debts.

"Our revenue is used to pay our nation's debts taken by Datuk Seri Najib Razak. We are lacking funds and have to spend wisely, ” he said.

Dr Mahathir said Sabah was not among the poorest states in the country, like Perlis and Kedah.

On calls for more federal funding, the Prime Minister said Sabah is one of the richest states in the whole country, once the oil from deep water oil wells starts yielding.

He said of all the sectors that can be tapped into, tourism was among the best and something that could be further promoted.

“But, we only get RM12mil of this, not all of our revenues from this sector comes to Sabah, ” he said.

Apart from that, Shafie said agriculture was a sector that can be pushed to generate jobs and income.

“If possible, we want the Federal Government to finance or invest in these sectors (tourism and agriculture), but we know they have a lot of debts to pay, ” he said.

He said Sabah, a land blessed with oil, also has lots of fertile land to develop on.

“We can grow and invest in our lands, ” Shafie said.

The chief minister also feels there is a need to phase out the subsidy mentality for those in the fisheries industry.

“We want to do away with diesel, fishing nets and boat subsidies, ” he said, adding that fishermen could, instead, transition into aquaculture.

He said the government can opt to give land for this purpose, so that fishermen do not need to go out to sea and risk being kidnapped or robbed.